The Maine DOL has issued an interpretive guidance on the new legislation addressing vacation entitlement upon cessation of employment.  These are the relevant points:

As stated in the law, it only applies to private employers with at least 11 employees. The guidance clarifies that those employees are employees “who work” in Maine.  It gives the example of an employer who has six employees in Maine and six in NH; that employer is not covered.   However, the guidance does not further clarify how remote workers might be counted or affected; presumably those working remotely out of state would not be counted.

Any vacation accrued prior to January 1, 2023 is not covered by the statute  – however, if prior to that date, it was the employer’s established practice or policy to pay accrued vacation on cessation of employment, the employer is still obligated to do so.  In other words, for any time accrued before January 1, you still follow the same payout rules as before. 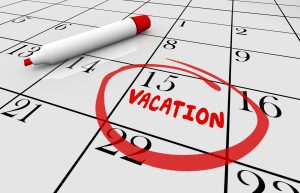 The guidance says that if a covered employer allows employees to accrue vacation, that employer may not have a policy or established practice that prohibits all unused, accrued vacation from being paid to an employee upon separation.   However, employers may have a vacation policy which caps accruals and therefore only pays out up to the cap. If employees accrue vacation in any form, employers must pay out all of the unused vacation that is accrued at the time of separation.

In the event that employees are covered by a CBA which “includes provisions addressing payment of vacation pay upon cessation of employment, the collective bargaining agreement supersedes” the vacation law.   The Wage and Hour Division may review the CBA to determine whether it includes such provisions but will not interpret or apply those provisions. If such provisions are found, that determination will conclude the Wage and Hour Division’s investigation; otherwise, the Division will apply the statute consistent with these interpretations.

Under its Frequently Asked Questions section, the guidance states the following:

What does it mean for vacation to be “accrued?”

The statute does not define accrual or accrued. However, WHD considers vacation time to be accrued if the employee has a defined amount of time that is available to them at any given time, even if that amount may, at times, be zero. This may include employees who accrue a certain number of hours per pay period or days per month or other similar accrual systems.

Is “front-loaded” vacation considered to be accrued?

Whether vacation that is “front-loaded,” which WHD considers to mean vacation that is credited to an employee all at once for a set period of time such as a calendar or fiscal year, is considered to be accrued depends on the employer’s policy or established practice. If the policy states that employees are credited with vacation as an advance against future accruals, the employer will be obligated to pay out all unused vacation which would have accrued at the time of separation – the employer is not obligated to pay out for unused vacation which would not yet have been accrued. If the employee used more time than would have been accrued at the time of separation, in this limited circumstance, the employer may deduct the amount of used, unaccrued time that exceeded what would have been accrued at the time of separation from the employee’s last paycheck.
In the absence of a clear policy or established practice establishing that front-loaded vacation is advanced against future accruals, however, WHD will presume that front-loaded vacation is accrued, in the full amount credited to the employee at the time that the vacation is credited. WHD strongly recommends that employers who use front-loading have a clear written policy.

If an employer offers unlimited vacation, does that constitute accrued vacation?

Unlimited vacation may be considered accrued if the employee has a defined amount of time that is available to them at any given time.

Does the statute require that accrued vacation roll over from year to year?

The statute only requires that employers pay accrued, unused vacation at the time of separation.

Based on this guidance and other leave law issues and because of the difficulty of discussing all of its implications by email blast, RW will be offering a Lunch and Learn on Friday, January 20th, 2023 focused on leave-related problems and solutions.