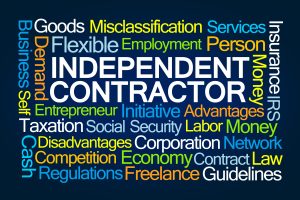 On October 13, 2022, the U.S. Department of Labor (DOL) issued a proposed rule regarding the determination of who is considered an independent contractor under the FLSA. The rule replaces the prior rule from January 2021 and focuses more on a “totality-of-the-circumstances” standard than the current economic realities test. According to the DOL, the new test will be more helpful in “evaluating modern work arrangements”.

Currently, under the January 2021 rule, there are five economic reality factors that are meant to guide the determination of independent contractor status. Two of those factors – the nature and degree of control over the work and the worker’s opportunity for profit or loss- were designated as the “core factors” that carry the most weight in the analysis. After that, there are three lesser factors to be considered: the amount of skill required for the work, the degree of permanence of the working relationship between the worker and the employer, and whether the worker is customarily engaged in an independently established trade, occupation, or business.

The proposed rule instead focuses on a “totality-of-the-circumstances” analysis, in which the factors are “considered in view of the economic reality of the whole activity” without predetermined weight to any one factor. The new proposed rule highlights six factors that are meant to “guide an assessment of the economic realities of the working relationship and the question of economic dependence.” No one factor or subset of factors is necessarily dispositive, and the weight to give each factor may depend on the facts and circumstances of the particular case. Moreover, these six factors are not exhaustive and additional factors may be considered.

The six factors are:

(1) the opportunity for profit or loss depending on managerial skill;

(2) investments by the worker and the employer;

(3) the degree of permanence of the work relationship;

(4) nature and degree of control, including whether the employer sets the worker’s schedule, supervises the performance of the work, or explicitly limits the worker’s ability to work for others;

(5) the extent to which the work performed is an integral part of the employer’s business; and

This proposed rule is not final and comments are being accepted by the DOL until November 28, 2022. Rudman Winchell’s Employment Team will discuss this new proposed rule in more detail at its Annual Employment Seminar on October 27th.