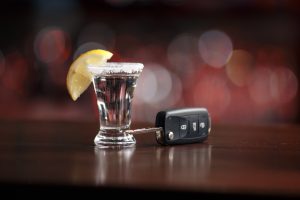 It’s January 99th in Bangor, Maine. You’re driving on Stillwater Avenue feeling like Han Solo the way you’re navigating those potholes. A little to the left! A little to the right! Entirely in the oncoming lane! You’re wondering where you can buy a set of Corellian Spike dice to hang from your rearview mirror because this is Millennium Falcon-level helmsmanship when —

Blue lights. License, registration, proof of insurance. Fast-forward and the friendly officer hands you the test results showing your alcohol level, well below the legal limit of 0.08. You breathe a sigh of relief — you get to keep your tax return and your weekend plans! Or do you?

Can you get convicted of OUI in Maine if your alcohol level is below the legal limit? Definitely. Here are three easy ways to get busted for OUI without even finishing your second can of raspberry White Claw.

Was there tequila in that margarita? Not much, but you haven’t said the words “salt, on the rocks” for years, and your cheeks are rosy and you’re feeling fine, which made your walk-and-turn test look more like a wobble-and-tilt test. That’s a problem.

In other words, even if you blow a 0.05 and can flawlessly execute a grand jeté if you forget there’s a G in the alphabet, you might still have committed an OUI. On the other hand, if you blow a 0.05 and can figure out the time that Train A meets Train B if Train A leaves Springfield traveling toward Fairview at 90 miles per hour and Train B leaves Fairview traveling toward Springfield at 60 miles per hour, but you have trouble balancing on one foot for more than a few seconds, you might still have committed an OUI. There’s a Jeff Foxworthy joke here, but we have more important things to talk about.

Your alcohol test is below the legal limit, but your eyes are bloodshot and your reaction time is slow. Maybe you’re affected by the LITERALLY TWO SIPS of Champagne, or maybe it’s the LITERALLY TWO HITS of weed. It doesn’t matter. At a trial, proof that alcohol, drugs, another intoxicant, or a combination of intoxicants caused impairment is enough for a conviction. State v. Atkins, 2015 ME 162, 129 A.3d 952. Like Mom says, “Too bad, so sad!”

Your test is 0.00! You passed on the dirty martinis, and the lemon drops, and even the Nutella-Frangelico ice cream sandwiches, but you did take your Xanax. Or, if you’re a trendsetter, your medical marijuana. You have a prescription, and you took it PRECISELY according to your doctor’s orders. It doesn’t matter. Your friendly neighborhood pharmacist (and their handy reminder stickers on your pill bottle) warned you about driving and operating heavy machinery while taking your prescription. It is NOT a defense to OUI that a person is under the influence of prescription drugs, EVEN if taken as prescribed.

“The issue for the court in an OUI prosecution is not whether the defendant acquired or ingested alcohol or drugs properly or improperly, but whether ingestion of alcohol or drugs impaired the defendant’s mental or physical faculties however slightly, or to any extent, while the defendant was operating a motor vehicle.” State v. Soucy, 2012 ME 16, 36 A.3d 910. If the painkillers make you loopy, a doctor’s note’s not your get-out-of-jail-free card.

A Couple of Other Pro Tips

Under Maine law, a test that’s below a 0.05 is “prima facie” evidence that you’re not under the influence of alcohol. In other words, unless there is more evidence to suggest you’re impaired, that’s not an OUI. A test that’s between a 0.05 and a 0.07 is evidence of alcohol impairment, but it’s not a nail in your coffin without more evidence of impairment. And, of course, a 0.08 or higher is a conviction, unless you can pull a rabbit out of a hat. 29-A M.R.S.A. § 2432. There are rabbits and hats, but that’s another blog for another day. Until next time, Slainte responsibly.

Disclaimer: These materials have been prepared by Rudman Winchell for educational purposes only. They are not legal advice. The transmission of this information to you is not intended to create a lawyer-client relationship. Readers should not act upon this information without seeking legal counsel. Do not send any confidential or private information to Rudman Winchell until a formal lawyer-client relationship has been established in writing.